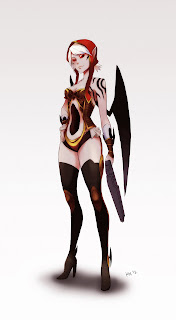 Just some update on those character profiles I posted earlier.
Here's Va-lis-ya this time around.

Race: Tan’gal
Age: 48 (But only has three wing-pairs).
The Immortal MercenaryVa-lis-ya is a bounty hunter/ mercenary, and her attire is more “space pirate” than soldier. Since she has remarkable regenerative powers (even amongst her race), she doesn’t wear much in the way of armor, since that’d only slow down her flight. She has the small wings on her forearms, and the wings on her back are large enough that she can fly with them. She’s very attractive, with a slim, streamlined body and a face that would be gorgeous if it wasn’t perpetually scowling, sneering, or laughing maniacally. Her weapons of choice are a scatter gun and a whip-sword that can electrocute its target.
Va-lis-ya is rude, loud, and has an explosive temper. She’s no sadist, but she has a sociopathic disregard for the lives of other creatures. That being said, she holds grudges, and takes great joy in vengeance. She loves drinking and gambling and most of all, money. There’s a reason for that.

Oh yeah, the profiles are from Paolo. I only did the illustrations and the colors.

Cheers!
Koi
Posted by Koi Carreon at 16:01
Email ThisBlogThis!Share to TwitterShare to FacebookShare to Pinterest