Hey guys! Allow me to take time to discuss the two main characters for my story for Mythspace.

First up is our boy Bros.

Race: Human
Age: 18
The Anarchist Mastermind
Orphan, gang leader, thief… Bros has seemingly made it his mission in life to prove that nothing is impossible if he sets his mind to it. A rabble rouser and puzzle fanatic, Bros is almost physically incapable of backing away from a challenge. He despises limitations, hierarchies, and “playing by the rules”.
Bros has dark brown skin and a runner's body, slim but muscled. He's average height for a Filipino, with slightly curly, always mussed, hair, worn long enough to make it seem like he's a week overdue for a haircut.

So yeah, this was the description given to me before I got to design the character. And it has been a journey actually. I think he's the character that went on a lot of changes before I finally decided to go with what we have right now. Its not as accurate as what was in the description but he retained that rebel attitude. 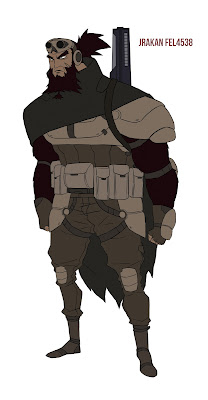 Race: Kapre
Age: Old for a Kapre, definitely more than a hundred
The OldSoldier
Jrakan is dressed like a soldier, camo-attire and goggles (that help him see in the day time, since daylight is too bright for him), and carries a sniper-type rifle and a firearm. His armor--and his body--is starting to fray at the edges, scarred and battered. He's a veteran of harsh conditions and brutal battles, and it shows. Think someone who'd fit right into the cast of the Expendables--but, you know, eight and a half feet tall (he's big, even for a Kapre) and super hairy.
Jrakan is the last kapre in the Philippines. He's been assigned there for sixty years, and when the orders came to abandon the islands for higher profile targets, he refused. Part of this is because of his rigid sense of duty, and part of this is because he fell in love with a human woman--Sharon Magkalas, Bros' grandmother. He has watched her from afar for more than half a century, but he's only appeared to her once, after he failed to prevent the abduction of Bros' parents.
Fun fact: Jrakan has a soft spot for Earth culture, particularly Filipio culture. He loves watching our noon time shows and soap operas, and considers adobo to be an exquisite delicacy.


Ok scratch what I said earlier. Jrakan went on to a lot of changes too before I got to what he looks like right now. And Its fun to draw this guy move in the comics. I treat him like he's Batman hiding in the shadows and stuff.

I guess that's it for now. Will discuss some more characters in the future!

Posted by Koi Carreon at 14:03
Email ThisBlogThis!Share to TwitterShare to FacebookShare to Pinterest