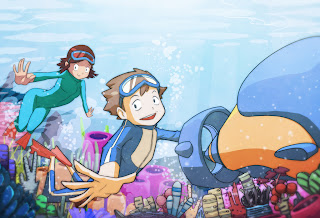 And it's out! The first game I get to be involved with is finally out on the app store. Fellas, if you're a fan of casual games like farmville and stuff check it out. Zoox for iPad

The game is available for iPad and its free for download. It's still not as awesome as I hoped it would be and there are a lot of inconsistencies on the 2d part; which by the way are the stuff that I was mostly involved in, but overall it looks good.

Its actually not my usual style with all the pastel colors and light mood, but it was fun making some of the concepts for this. At the moment I'm still struggling with style issues here and there and can't really start on this next project that I've been putting off for weeks now. Time frame for the said project is out of whack now. Will try to start on it soon and try to get some pages done. Anyway, will try and post some more stuff soon! See ya guys!

Posted by Koi Carreon at 11:00
Email ThisBlogThis!Share to TwitterShare to FacebookShare to Pinterest