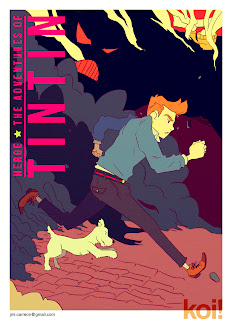 I haven't read a lot of the published comic books of this guy. But I did watch the tv series when I was a kid. So, a little introduction to the folks who don't know who this guy is.


The Adventures of Tintin (Les Aventures de Tintin) is a series of classic comic books created by the French-Belgian artist Georges Rémi (1907–1983), who wrote under the pen name of Hergé. The series is one of the most popular European comics of the 20th century, with translations published in more than 80 languages and more than 350 million copies of the books sold to date. Its popularity around the world has been attributed to its "universal appeal" and its ability to transcend "time, language and culture."
Tintin is a young reporter, and Hergé uses this to present the character in a number of adventures which were contemporary with the period in which he was working, most notably, the Bolshevik uprising in Russia and World War II, and sometimes even prescient, as in the case of the moon landings.
I got that from Wikipedia, for more info on Tintin just read it here

Now that we're done with introductions, so here's my take on Tintin for our artjam this week. Yea I know that there are a lot of things wrong here, especially the running pose that is basically out of whack, but hey the important thing is the idea, right?
My idea for my Tintin is to mix the 60's spy era with Japan's giant robot era. Yea sorry for the crappy robot, but you folks get it, right? Plus throw in a funky soundtrack like Redline's Lynchman theme and you have a funky version of Tintin with giant robots and sci-fi gadgets.

Posted by Koi Carreon at 15:33
Email ThisBlogThis!Share to TwitterShare to FacebookShare to Pinterest